The Teofilović twins, Ratko and Radiša, were born in Čačak, Serbia. There in their hometown they received their first exposure to the world of music in 1983, through the auspices of Predrag Peruničić, a local choir conductor. They spent the following eight years with Peruničić’s choir, and worked closely with him. After his sudden death in 1991, they embarked upon research and new vocal interpretations of the traditional folk music and music culture of Serbia and the Balkans, which work has grown into their lifelong commitment. In their vocal interpretation of this traditional poetic and musical heritage they insist on an authentic, never-before-used-form, a two-voice a capella, which has become their professional musical signature, helping them to forge a unique position in the musical landscape of the Balkans.

Their professional recording and concert career began in the early nineties with a recording of thirty musical numbers for national radio and television. 1998 saw the publication of their debut album Čuvari sna (Dream Keepers), and as such was an important turning point in their career. This album, a collection of fifteen traditional Serbian folk songs, was immediately well-received, being warmly greeted both by music professionals and by the public at large. Many music critics and specialists hailed the Teofilovićs as the most important musical development in Serbia at the time: Ratko and Radiša are not only the keepers of a common folk dream but also a unique evidence of a song's miraculous power (Petar Peca Popović); they attest that the traditional folk songs are not a fetish, nor a relic, but a constant liturgical movement of the spirit through time (Emilija Radmilović)

Their next album, comprising sixteen traditional folk songs with the poetic title Sabazorski vetrovi (Winds of Dawn), was released in 2001 and was equally well-received by the public. As Dr. Prof. Nenad Ljubinković explained, this musical achievement of the Teofilović brothers represents not only a continuation of their research in contemporary ethno-musical expression, but it is foremost a representation of a quest for meaning and beauty in life.

Always strong believers in live sound, and aware that their singing gets more forceful live in concerts than in studio recordings, the Teofilovićs released in 2005 another album, Koncert Belgrade Live (Concert Belgrade Live), containing music recorded at one of their concerts in Belgrade. In relation to this album Ivan Ivačković wrote: Ratko and Radiša Teofilović are twins with voices that appear once in a decade if not even more rarely...

While their work is led by the belief that the human voice is the oldest and the most perfect musical instrument, the Teofilovićs have occasionally collaborated with instrumental musicians. They performed with Žorž Grujić, a member of the RENESANS ensemble of early music, who is a specialist in old instruments, with the composer and percussionist Nebojša Živković, and also with the accordion professor Boban Bjelić. However, their most successful and most important collaboration has been with the well-known Los Angeles-based guitarist, Miroslav Tadić. Together they made the album Vidarica (She-Healer) containing fourteen interpretations of folk songs from Central Serbia, Kosovo and Metohija, Bosnia, Dalmatia, and Macedonia. In a certain sense, the album Vidarica represents a new chapter in the career of the Teofilovic twins, since it combines their magnificent voices with the sound of a string instrument. This exciting musico-poetical story, according to the characterization of music critic Marija Ćirić, likewise had a superb public reception: Hence Vidarica becomes more than music; through the interpretation of these three musicians it gains indeed a healing power and offers a (sonic) representation of reality far more appealing than the one we inhabit (Marija Ćirić); An album like Vidarica, can be created only by talented narrators: a musical album and an important work for future generations, something that the audience should consume with a great responsibility (Ivica Stanković). The collaboration with Miroslav Tadić continued after the album, through a series of public performances. 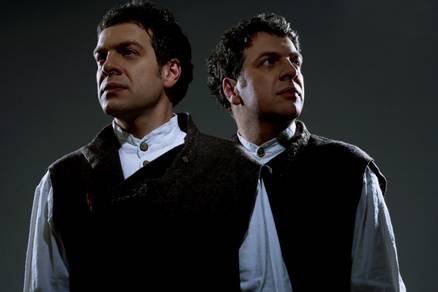 The Teofilovićs have held a great number of concerts in almost all European capitals, as well as in Japan and the United States… They have appeared in some of the most prestigious concert halls in the world, including The Kennedy Center (Washington, DC), The Hall of Honor, (Canadian Parliament, Ottawa), The Franz Liszt Concert Hall (Budapest), The Tchaikovsky Concert Hall (Moscow), The Vienna Konzerthaus-Mozartsaal (Vienna), as well as in big festivals like the World Performing Arts Festival (Osaka), the Sziget festival (Budapest), the Estivoce Festival (Corsica), Canti di tradizioni (Sardinia), Mehr als Musik (Linz), The Sound of Stübing (Graz), Glatt & Verkehrt (Krems), The Stans Musikstage (Stans, Switzerland) to mention just some of them. The Teofilović twins have performed also in some of the most prestigious American universities: the New England Conservatory (Boston), the University of Chicago, George Washington University (Washington DC), the California Institute of the Arts (Valencia), and Franklin College (Indiana).

The Voices of the Century, The Music Art Icons, and the Supreme Artistic Achievement of the Festival, are among the titles and accolades bestowed on the Teofilović twins by the international press and festival organizers. It is in these live concerts that one can sense the incredible richness of their melodic interpretation, the poignant power of their vocal undulation, and the sheer force of their passion and commitment: their power to create a unique music experience that cannot be easily forgotten.